Metamorpohis with human face. One of a kind: “Olbiński/Olbiński. Metamorphosis” – outstanding artistic event with ecological theme

A whale is lying on a Sea Side Beach Resort de Naic in Cavite, Philippines. It’s huge. It would probably weight 8 tons if it was real, but it is a realistic sculpture made of plastic waste. This project was created by Greenpeace and Dentsu Jayme Syfu to commemorate a real whale found there dying on the beach because of the plastic bags and bottles he ingested while swimming in the ocean. Whales eat what they find in the water. Annually 8 tons of plastic waste ends up in the oceans, including botlles, cups, strawa and plates. Islands made of indestructible trash floats in the water. The biggest of them, located on the Pacific Ocean, is already five times bigger than Poland.

Humans managed to trash the fairytale world. And now the trash cannot be swept under the carpet any more.

To protect the whales, American National Oceanic and Atmospheric Administration announced an international competition for the most effective computer programme to identify specific whales. It can help to track the routes of the whales and that will lead to establishing protective areas for the animals. Polish programmers form the company Deepsense.io won the competition with 363 teams from all over the world. The programme they developed identifies the whales by… face features.

Ćmielów is not at the seaside, and definetely anywhere near the ocean, even if the drive to the Mediterranean Sea is shorter than to Warsaw. Still, the project “Olbiński/Olbiński. Metamorphosis”, presenting new works by Rafał Olbiński and Natalia Olbiński, curated by Katarzyna Rij is the voice in the world discussion about protecting the environment and elimination of plastic waste from everyday life. The sparkle for this exhibition was Natalia’s views on the protection of the environment.

While the exhibition lasts in the postindustrial space of old paintshop of porcelain manufactory, where Van Rij Gallery has its main location, in Katowice there is an UN Conference on Climate Change, with an aim to draw attention to the destruction of our world an extinction of many species. European Comission is applying changes to the laws about the protection of the environment to decrease the amount of plastic waste in the seas and oceans.

I am fascinated by the sea and creatures that inhabits it, especially whales. For years we’ve been destroying the world, our oceans, in which now only 400 of Nort Atlantic right whales live” – says Natalia Olbiński. Porcelain figurines designed by the artist have human faces. They are Doris and Nereus, Greek gods of the ocean. Nereus was a kind deity helping the sailors, said to be Pontos’ and Gaia’s son. His wife, oceanid Doris, whose name means a gift, gave birth to his daughters, 50 sea nymphs.

Limited edition of 500 figurines of Doris and Nereus was hand crafted in AS Ćmielów manufactory. “The decoration of the first 50 special edition pieces was hand made line after line by the artist herself” – says Katarzyna Rij, exhibition curator.

These porcelain sculptures, every one in different decoration, are presented at the exhibition.

Natalia Olbiński works as a graphic designer and illustrator. She is an artistic director of Italian magazine “La Rivista” and a co-creator of the magazine on the mediterranean culture titled “Lente”. She won, among others, a competition for a poster held by Cannes Film Festival. She wrote a book “Atlantis. City Guide” with her own illustrations.

Rafał Olbiński is one of the most recognized painters, illustrators and poster artists of his time. Firstly, he conquered New York, where he lived for 30 years, then the whole world. He created hundreds of paintings, posters and illustrations, several dozen magazine covers. He took part in numerous exhibitions around the world and won over 150 awards, even as prestigious as Prix Savignac, “the Oscar of the poster world”.

Exhibition “Olbiński/Olbiński. Metamorphosis”, inspired by works of Ovid, is an unique artistic event with ecological theme. Curator Katarzyna Rij creates the message of the art with suggestive arrangement made of plastic waste. She makes the “Metamorphosis” to be a voice in the international discussion about the impact of human actions on the sea world. A plastic whale of natural size, similar to the one from Philippinean beach, confined in plastic, dead sea craetures with human faces and broken spines, covered with oil used to make plastic – this is engaged art, the warning to show what we have already lost with no return.

There is no sea as the one Rafał Olbiński paints. He told me once: “Sea is my longing from the childhood, when I wanted to be a sailor. What is there to miss for a boy born in Kielce, except sea.” His sea is clean, calm, sapphire-blue, unreal and realistic all at once. His idyllic and surreal vision of the world consists of clean beaches under the blue sky, fauna and flora of the sean and the land. It’s fantastic lands full of symbols and metaphors. Works by Natalia Olbiński are inspires by the lecture – books about mythology, sea creatures, medeival illuminations, cartographic illustrations, sailors, explorers and the history of whale hunting.

“Metamorphosis” presents the Olbiński/Olbiński works together for the first time as a Father/Daughter duet, showing their artistic dialogue.

.The concept of showing the works of Rafał and Natalia together also underwent a metamorphosis, to finally, thanks to the curatorial arrangement, take part in the world discussion about the devastation of the oceans. The exhibition is meant to provoke the reflection about human behaviour that makes the planet loose its most precious life-giving powers.

Except of its artistic worth, the exhibition has a moral message, a non-esthetic function.

“I hope that a duet Natalia and Rafał made together will be memorable for a long time and show that different artistic works of father and daughter can create a unity and tell the bigger story” – sums up Katarzyna Rij.

“Live on earth started in the ocean” – Natalia Olbiński reminds. Peter Godfrey-Smith, historian, philosopher and explorer of the ocean depths once wrote: “When you dive into the sea, you are diving into the origin of us all”.

It would be a shame to  find there only plastic bottles. 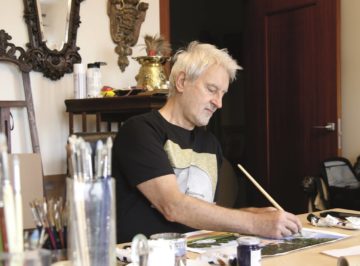 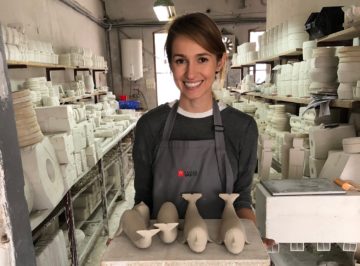 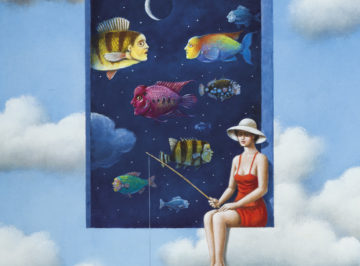 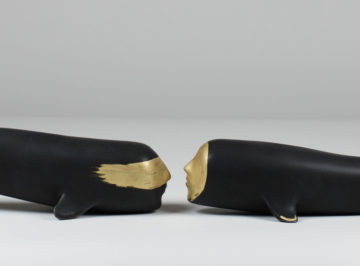 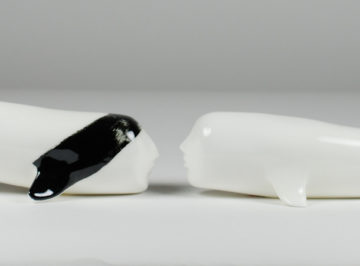 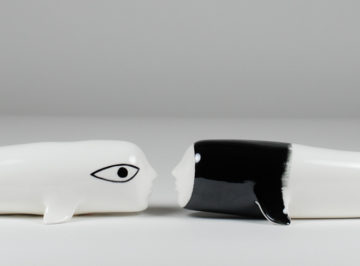 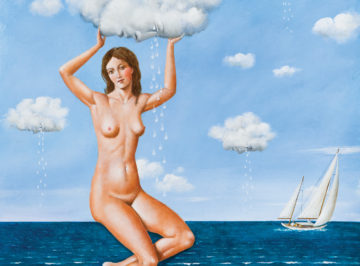 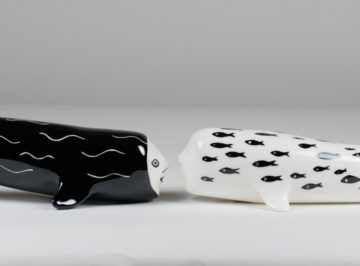 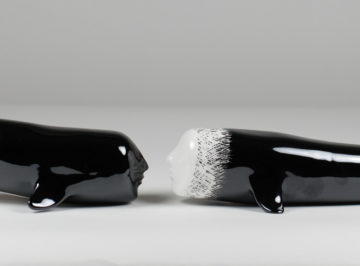 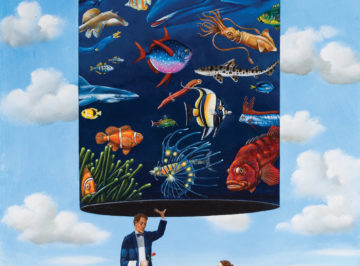 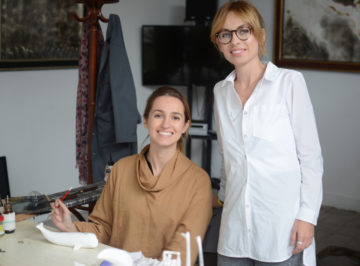 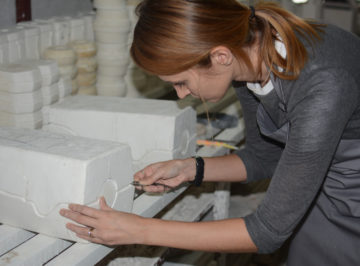 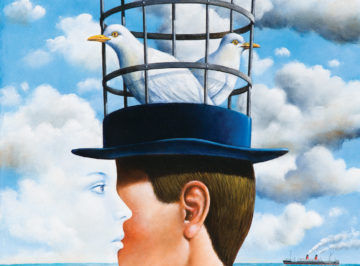 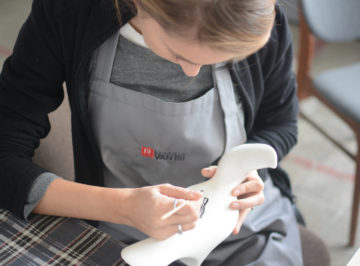 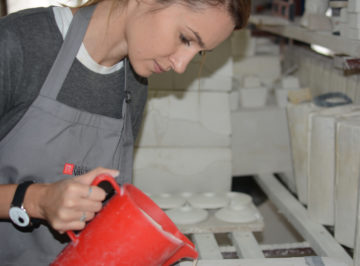 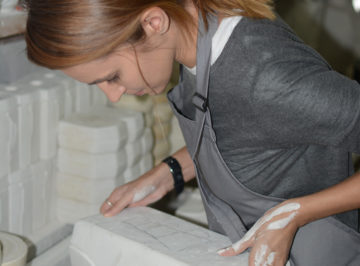 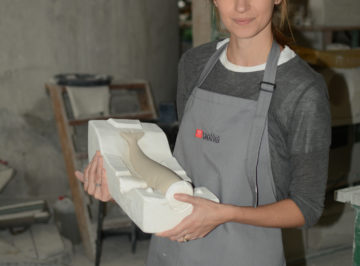 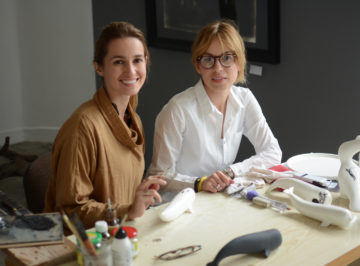 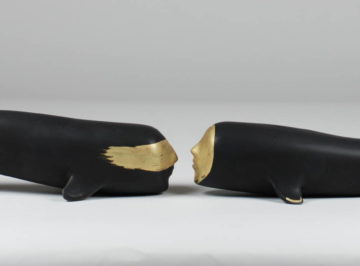 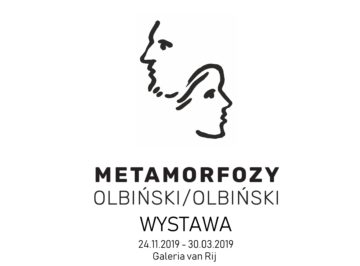